Domenico Lo TURCO, was born in Rochester , New York on the 26 of september 1920.  He first entered in the Citizen's Military training Camp army at Fort Niagara, New York, under command of the 28th Infantry from July the 6th to August the 4th. Then on the 30th of July 1940 he joined the army at Madison barracks affected to Head Quarter Battery of the 5th field Artillery Battalion. When the US army started to make Airborne units he Voluntered for and because of his Artillery knowledges was affected to the 377th field Artillery battalion of the 101st Airborne division. The battalion, was officialy activated as a Airborne unit on the 16th of august 1942 at Camp Clairborne, Louisiana. Month after month the Airbornes units became bigger and bigger and on the 14th of april 1943 was created the 460th parachute infantry battalion attached to the 17th Airborne division. The 460th PFAB was formed at Camp Toccoa, Georgia, under the command of Lieutenant Colonel James B. Anderson and utilizing cadre from the 377th PFAB. Leo TURCO was tranfered to this unit and affected to "A" battery, and momoted field wire chief communication. After training at Camp Toccoa and Camp Mackall, North Carolina, he conducted jump training at Fort Benning, Georgia, completing its fifth training jump on 18 September 1943. Further training at Camp Mackall culminated in training maneuvers in Tennessee in January–February 1944, where the battalion participated in the "annihilation" of the 26th "Yankee" Division during a 64 miles forced march with its supported infantry.

Returning to Camp Mackall, the battalion was relieved from the 17th Airborne Division and attached to the 517th Parachute Infantry Regiment to form the 517th Parachute Regimental Combat Team (PRCT). In early May 1944, former 460th commander Lieutenant Colonel Anderson and his staff were relieved, replaced by Lieutenant Colonel Raymond L. CATO and officers selected from the 466th PFAB. During this short period before deployment, Lieutenant Colonel CATO ordered Battery D, originally organized as an anti-tank and anti-aircraft unit with 37mm guns and .50 caliber machine guns, converted to a fourth 75mm pack howitzer battery. After final preparations at Camp Patrick Henry, Virginia, the battalion departed Hampton Roads, Virginia on 17 May 1944, aboard the USS "Cristobal".

Arriving in Naples, Italy, on 31 May 1944, the 460th staged at "The Crater" outside the city for two weeks, waiting the arrival of the unit's equipment. After moving north aboard an LST to Civitavecchia, the 460th entered combat, supporting the 36th Infantry Division's attacks toward Follonica for 12 days. Throughout July 1944, the battalion staged at Frascati, near Rome. While preparing for the invasion of southern France, the Paratroopers were also able to relax with passes to Rome, the establishment of an NCO club, and other amusements. Some non-jumpers were also qualified at the Airborne Training Center south of Rome.

On 12 August 1944, the battalion (less Battery C, which staged with the 1st Battalion, 517th Parachute Infantry near Canino and assaulted with 1/517 in Serial 9) staged at the Montalto Air Field for two days, before departing for France in the Serial 8. On 15 August 1944, Leo TURCO and his brother in arms conducted its first combat parachute assault, landing in southern France. He jumped at about 4h.30 in the valley triangled villages of Trans en Provence, La Motte and Le Muy. On the evening of 15 August 1944, the battalion received the gliders of the 602nd Glider FA Battalion, doubling the artillery support to the infantry on the Drop Zone and Landing zone area. for  Over the next 90 days, the 460th accompanied the 517th as it pursued the Germans north and east into the Maritims Alps, continuously providing direct support to the infantry and firing about 9,130 rounds. After relief in the line, the battalion was assigned to XVIII Airborne Corps and moved from La Colle sur Loup north of Nice, then to Soissons in northern France by train, arriving on 9–10 December 1944 for the terrible battle of the Bulge. Leo was lucky during all this time and never been wounded and was discharged and sent back in United Stades on the september the 5th 1945 with his outfit survivors.  Leo was awarded of the American Defense medal, European, African, Middle Eastern service medal bronze service arrow head, and good conduct medal. We first met Leo TURCO and his wife Joyce when they came back to Southern France in september 1994, and stayed in touch all the rest of his life. During one meeting in USA, he presented one of his dog tag to thanks us for keeping his memory alive and explaned that it was accidentaly because they added the letter "E" when they printed his dogtags in the Army that he changed Domenico Lo TURCO to Leo. He passed away on the 10th of may 2005 but him and his wife will always host a special place in our heart. 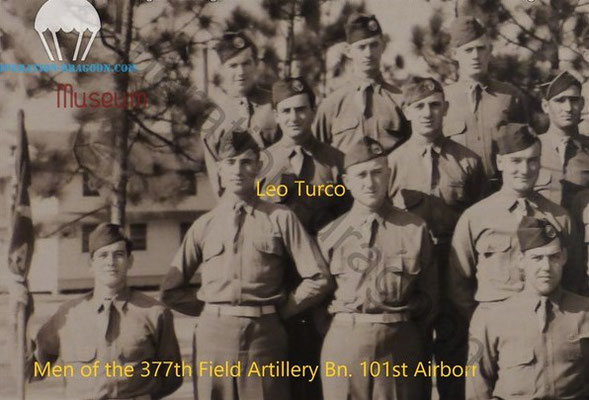